BYOA (Bring Your Own Avocados) 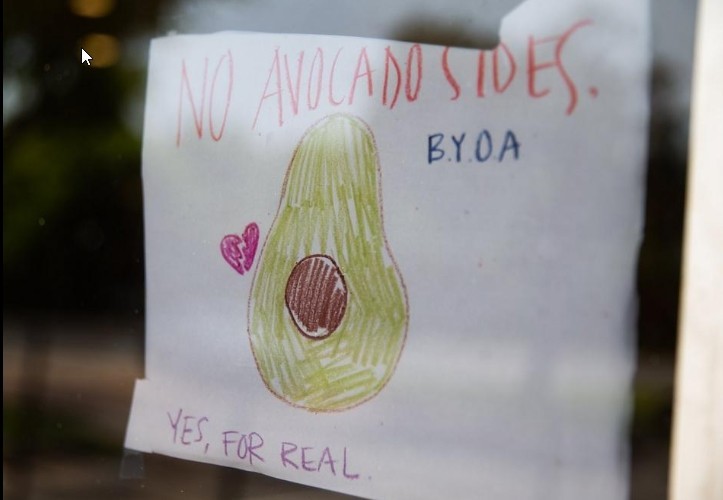 Texans love avocados.  We love them on almost EVERYTHING.  So when the avocados from Mexico become more scarce, we feel it.

Wholesale prices for avocados imported from Mexico have more than doubled in the past month, according to Austin restaurant owners, leaving restaurateurs scrambling for ways to respond. Consumers are also seeing higher prices at grocery stores. The increases are caused by where we are in the growing season and a tightened supply, which is controlled by producers, according to industry experts.

Product Services of Los Angeles, a large national distributor of avocados, wrote in a recent newsletter that extremely low production in Mexico and demand exceeding supply have led to the higher prices.

From February to April, generally more than 50 million pounds of avocados were produced each week in Mexico, according to the Haas Avocado Board. That number crested to 60 million the second week of April before crashing to 30 million the next week. The numbers continued to fall in subsequent weeks, bottoming out at 8.6 million the last week of June — a third of what Mexican farmers shipped the same week a year before.  Mexican yields have bounced back, however, and analysts expect growers to produce about 30 million pounds a week until fall.

Tony Stachurski, a division president at Dallas-based Hardie’s Fresh Foods, which sells produce to restaurants, grocers, schools and more, said that while transitions in growing regions have led to the temporary hike in prices, the main reason behind the output and price change is the small group of farmers and ranchers who control production coming out of Mexico.

“At the end of the day, Mexico has the amount of fruit that we need,” Stachurski said. “It’s extremely volatile, the avocado market. It is a high-demand, high-cost item controlled by very few farmers and ranchers.”

Instability in Mexico has also interrupted the normal flow of the exported fruit. According to the nonprofit Organized Crime and Corruptions Reporting Project, Mexican farmers claim that “each day about 48 tons — four truckloads worth of avocados — are stolen by gangs that hijack their shipments on state highways in Michohocán.”

Mexico accounts for 80% of the avocados consumed in the United States, which is why the shortage has been acutely felt here. California growers had the worst season they’ve had in 10 years, with yields topping out at about 10 million a week, as opposed to the 13 million a week they typically average, a 30% decline. The California season is coming to an end and will pick back up next spring.

Get the entire story:

We're doing our part to make fresh fruit & vegetables more accessible to the communities we serve. Look for Hardie's trucks at the following locations.

Hardie's Fresh Foods is monitoring the coronavirus (COVID-19) very carefully and while risk is very low, we are doing all we can to prevent spread of the illness. No disruption to our business or product supply is expected at this time.